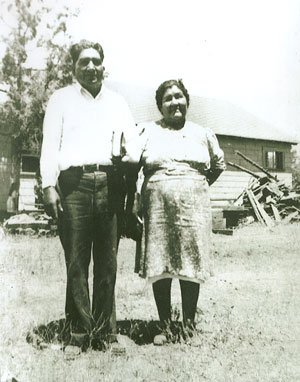 Goose Lake and the surrounding country are the ancestral territory and home of the Hewisedawi people. Hewise means “Up Above” or “On Top” in their native language, Hewisedawi means “Those from On Top.” The people often refer to themselves as just Hewise (pronounced Hay~wee-see).
For thousands of years, several Hewise villages were situated around the lake, Hewise territory stretched from Fandango Valley south through the Warner Mountains to Cedar Pass; west across the Pit River and out onto the high plateau area called Devil’s Garden; north up to the west side of Goose Lake. Other villages were located in the south of the territory along the Pit River and out on the Devils Garden area. The Hewise utilized the natural resources of their land to the fullest; Besides harvesting deer, elk, rabbit, groundhog, birds, and fish, they often moved around their territory and gathered roots, herbs, and fruits, as each came into their season.

The movement of white emigrants from the 1840‘s to the 1860’s through Hewise territory caused massive destruction of the natural environment. The emigrants passing through had no respect for the delicate balance of nature, often grazing their cattle and horses in prime Hewise hunting and gathering areas. Some Hewise attacked these invaders; others practiced avoidance. in the tate 1860’s, other emigrants arrived determined to occupy Hewise land without any respect for the local people already living there, and began the process of confiscating and fencing off the land. They also constructed the towns of Willow Ranch, New Pine Creek, and Davis Creek.

Some Hewise joined the Astarawi, Kosealekte, Hammawi, Modoc, and Paiute in sporadic uprisings during this period, but by 1868 Hewise resistance ended as the US Army under General George Crook brutally took control of the area. The story has been handed down that Hewise knew the soldiers were coming to kill them all so they hid their babies and young children under baskets and covered them with brush and dirt, while the adults scattered.

The occupation of the valley areas by whites, and the damage done by the introduction of cattle and sheep, disrupted the Hewise traditional food supply. By necessity of survival, the Hewise either stayed out in more inaccessible areas, or congregated with other indians in “indian camps” outside of towns, such as Alturas. Here, into the 1900’s, they sunrived in poverty and hired out as ranch hands to white landowners. The arrival of white emigrants forever altered the environment and culture of the Hewise people. The extinction of the elk, grizzly bear, wolf, and moose is a direct result of the arrival of whites into the area.

The Hewise people never signed a treaty with the United States; their land was simply confiscated. Today, the Hewisedawi have survived and continue to live in what is now called Modoc County, as well as throughout the West. They continue to hunt and gather in their traditional places, and pray at their sacred sites throughout their homeland. Today, they are federally recognized indians and one of eleven bands making up the Pit River Nation.

“Reflection”
Today I peered through the stifling mist
That separates the spirit world from the land of my Grand fathers.
I see little resemblance of the land I knew where in my time,
I was spawned and grew.
Gone is the pristine beauty that inspired my youth.
Seasonal fragrances that permeated the glen
Replaced now by the offending odors of our conquerors.
The delicate sounds that announced the seasons are muffled now
By the unnatural clamor of the hairy ones.
In my youth I had tarried here
Blessed to have lived in a natural scheme
Where all things share a mutual bond.
The living and the inanimate shared space
As equals, without preference for the human race.
It was here as a boy I learned of honor, respect, and reverence.
To be appreciative of the world around me and of the mysteries that abound me.
Mysteries that dictated the character of life, here and beyond.
Early, it was my grandfather that taught me about the circle of life
And of the order of nature that maintains a fragile balance.
Where all things must contribute freely to sustain the perpetual balance of life,
Taking and giving equally.
I learned of joy as I learned of sorrow
It was ordained that each would strengthen my earthly journey
To enhance my faith in natures scheme.
All things that are born will surely die,
Such is no mortals dream.
Commanded by the will of the ancient ones
I embrace my vision quest in solitude
I sought to find myself and my key to the veiled world
between death and life.
My medicine bag holds my destiny in bounty and strife.
My quest completed, I was then a man.
A foundling perhaps, nonetheless a man.
My medicine honors me to be a dreamer
A bearer of mystical revelations
Sustained by grandfathers faith to be the seer for our nation.
My first coup I counted in an enemy camp undetected
I abducted my adversaries woman child.
She came to be my loving wife.
Guided by the master unseen hands
I became a warrior I aspired to be
The leader of my intimate band.
It was good to be alive
To exist in harmony with the world around
To enjoy the bounty of natural order
Unchallenged by the minds of men.
Such was… bounty.